Experienced Associate Professor Of Chemistry with a demonstrated history of working in the higher education industry. Skilled in Chemistry, Organometallic Chemistry, Spectroscopy, Lecturing, and Organic Chemistry. Strong education professional with a Postdoc focused in Educational Evaluation and Research from Albert-Ludwig University, Freiburg, Germany.

Biography: Alexander O. Terent’ev was born in Moscow, in 1973. He received his ReadMore...

Biography: Dr. Mangalagiu is a professor of organic and medicinal chemistry and V ReadMore...

Research Interest: His research focused in the area of Heterocycles Compounds.

His research focused in the area of Heterocycles Compounds.

Biography: Igor Perepichka is a Professor of Chemistry at Bangor University, UK. ReadMore...

Igor Perepichka is a Professor of Chemistry at Bangor University, UK. He obtained his Diploma in Chemical Engineering from Donetsk Polytechnic Institute (1981) and his PhD in Organic Chemistry from the Institute of Physical Organic Chemistry of the National Academy of Sciences of Ukraine, IPOCC NASU (1987). He started his career at IPOCC NASU in Ukraine as an engineer in 1981 and was promoted to Senior Research Scientist in 1989. He has held several visiting positions, including Alexander von Humboldt Fellow (Würzburg University, Germany, 1995–1997), Visiting Scientist (CEA Saclay, 1999 and CNRS, 2000–2001, France), Invited Professor (Angers University, 2001–2002), Senior Research Associate (Durham University, 2003–2007). In 2007 he moved to the University of Central Lancashire (Preston, UK) as Reader in Chemistry. In 2010 he was appointed as Professor of Chemistry at Bangor University, UK. His work is documented in over 100 papers in refereed journals, over 20 patents and over 20 book chapters and proceedings. He was also an Editor of “Handbook of Thiophene-Based Materials: Applications in Organic Electronics and Photonics” (I. F. Perepichka, D. F. Perepichka, Two-Volumes Set, Wiley, 2009).

Faiza Diaba studied chemistry at the University of Constantine, Algeria. She then obtained her PhD in organic chemistry with Dr. Micheline Grignon-Dubois at Bordeaux I University, France. After a two years postdoctoral position with Prof. Josep Bonjoch at Barcelona University, she pursued her scientific career as a lecturer and since 2009 she is an associate professor at the same University. Besides teaching organic chemistry and spectroscopy, her big passion is constructing molecules. Her work is focused on developing new reactions for the synthesis of nitrogen heterocycles directed to the synthesis of natural compounds using radical chemistry, organocatalysis and iodoaminocyclizations catalyzed by NIS.

Biography: Tofik Nagiev is a Vice-president of Azerbaijan National Academy of Sci ReadMore...

Biography: Professor Ayman El-Faham received his Ph.D in 1991 as a joint project ReadMore...

Professor Ayman El-Faham received his Ph.D in 1991 as a joint project between Alexandria University and University of Massachusetts, Amherst, U. S. A. under the supervision of Prof. L. A. Carpino, where he worked on the synthesis of new protecting groups for both solution and solid phase peptide synthesis. Prof. El-Faham involved in the development of new coupling reagents based on 1-hydroxy-7-azabenzotriazole during his postdoctoral (1992-1999) at the UMASS in Prof. Carpino’s Lab. He holds many patents in this field. He joined the Barcelona Science Park during the summer of 2006, 2007, 2008, 2009 and 2011 worked with Prof. Fernando Albericio in the development of a new family of coupling reagents. He acted as Head of the Chemistry Department, Beirut Arab University, Lebanon (2000-2004) and as Vice Dean, Faculty of Science Alexandria University (2010-2011); currently he is Professor of Organic and Peptide Chemistry, at King Saud University, Riyadh, Saudi Arabia. Email: [email protected]

Prof. El-Faham involved in the development of new coupling reagents based on 1-hydroxy-7-azabenzotriazole during his postdoctoral (1992-1999) 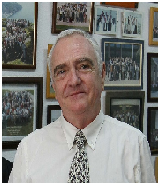 Biography: Miguel Yus was born in Zaragoza (Spain) in 1947, and received his BSc ReadMore...

Miguel Yus was born in Zaragoza (Spain) in 1947, and received his BSc (1969), MSc (1971) and PhD (1973) degrees from the University of Zaragoza. After spending two years as a postdoctoral fellow at the Max Planck Institut für Kohlenforschung in Mülheim a.d. Ruhr he returned to Spain to the University of Oviedo where he became associate professor in 1977, being promoted to full professor in 1987 at the same university. In 1988 he moved to a chair in Organic Chemistry at the University of Alicante. Professor Yus has been visiting professor at different institutions and universities among them ETH-Zentrum, Oxford, Harvard, Uppsala, Marseille, Tucson, Okayama, Paris, Strasbourg, Bolonia, Sassari, Tokyo and Kyoto. He is co-author of more than 600 papers (and five patents) and has supervised more than 60 Doctoral Theses (already presented), and delivered more than 200 lectures, most of them abroad. At March 2017 his h index is 65. Among others, he has received the Spanish-French Prize (1999), twice the Japan Society for the Promotion of Science Prize (Okayama 2000, Kyoto 2007), the Stiefvater Memorial Lectureship Award (Lincoln 2001), the Nagase Science and Technology Foundation fellowship (Kyoto 2003), the Cellchem Lectureship (Sheffield 2005), the Singenta Lectureship (Basel 2007), the Fundeun-Iberdrola Prize (Alicante 2007), the Serratosa Lectureship (Barcelona 2010), the Conferencia Lourenço-Madinaveitia (Lisboa 2012), the Medalla Felix Serratosa from the RSEQ (Madrid 2012), being also named recently Active Academician from the European Academy of Sciences and Arts (Salzburg 2012). Professor Yus has been in the Advisory Board of 20 international journals, among others, Tetrahedron, Tetrahedron Letters, European Journal of Organic Chemistry, Chemistry Letters, The Chemical Record, Current Organic Chemistry, Current Chemical Biology, Jordan Journal of Chemistry, Applied Sciences, and Trends in Organic Chemistry, being also Editor-in-Chief of Letters in Organic Chemistry and Open Chemistry, as well as Regional Editor of The World Journal of Chemistry. His current research interest is focused on the preparation of very reactive functionalized organometallic compounds and their use in synthetic organic chemistry, arene-catalyzed activation of different metals, preparation of new metal-based catalysts, including metallic nanoparticles, for homogeneous and heterogeneous selective reactions, and asymmetric catalysis. Professor Yus founded the new chemical company MEDALCHEMY S.L. to commercialize fine chemicals.

Research Interest: His research interest is on synthectic organic chemistry and ReadMore...

His research interest is on synthectic organic chemistry and medicinal chemistry.

Prof. Dr. Gerd Kaupp studied chemistry at the University of Würzburg, Germany and had postdoctoral appointments at Ames, Iowa, Lausanne, and Freiburg i. Br, where he became appointed as associate professor. From there he was appointed full professor at the University of Oldenburg in 1982. He guided a successful research group with various projects and cooperation with numerous industries and worldwide academic research groups. He served as guest professor for three international universities. Prof. Kaupp is now a retired member at the University of Oldenburg and pursues his scientific interests also with consulting. His expertise is in chemical kinetics, laser photochemistry, waste-free benign syntheses and productions, solid-state chemistry, reactive milling, mechanochemistry, atomic force microscopy AFM, scanning near-field optical microscopy SNOM, nanoscratching, nanoindentation, standardization in nanomechanics, and bionics. He is keynote speaker in these fields, published numerous scientific papers and books and is inventor of patents in solid-state and environmental chemistry. Email: [email protected]

Research Interest: His interest is on Organic Chemistry.

His interest is on Organic Chemistry.